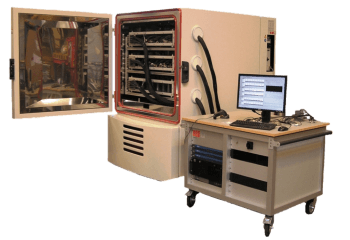 The system is configurable with regard to temperatures, test time etc. Typical testtime is 4 hours per batch. Real-time monitoring and logging of results are handled during test.

Developed for a big Swedish customer and installed at an EMS production site in Malaysia. DSE is supporting the system based on a service support agreement via remote interface.

Software based on TestStand and LabView 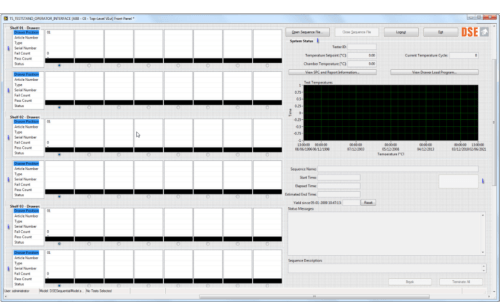 The application is based on National Instruments TestStand and LabView. During test UUT’s are uploaded with VxWorks based BIST.

The system leverages local XML files combined with SQL-databases, allowing the system to operate without data loss even in situations where network or database access fails. 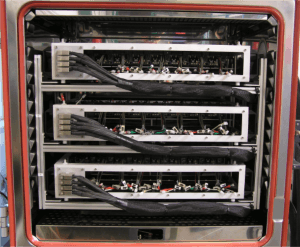 The system uses a standard Vötch climate chamber, for which DSE has developed a cassette solution handling 3 x 12 UUT’s. The cassettes are connected to the test hardware through a cable harness. The test hardware comprises a significant amount of switching, RS-232/-485/-RS422 interfaces, Ethernet, powersupplies and more. Servers etc. are embedded to ensure uptime in a demanding environment.